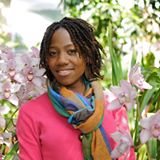 Ufuoma Otu is a multimedia communications strategist and founder of Take Culture Media. She is a results-oriented integrated communications executive with experience leading a wide-range of high profile projects. Ufuoma is experienced in mobilizing teams and delivering strategic, cost-effective outcomes for clients in more than 15 industries in several countries around the world.

Ufuoma has a Bachelor of Arts degree from Loyola University Chicago and an M.B.A. from Roosevelt University.